Daisy Cooper, the MP for St Albans, has called on the government and the new housing minister, Michael Gove, to make adequate funds available to compensate leaseholders now facing massive bills to make their properties safe after the Grenfell Tower disaster.

Addressing the Leaseholders Together Rally in Parliament Square on 16 September, she described the fire safety crisis suffered by leaseholders in Grenfell’s wake as “a national scandal of epic proportions”.

“I got involved in the campaign because of my local residents. When they came to me more than 18 months ago, they were shocked because their service charge bills had gone from about a grand to about six grand. And that seemed a lot 18 months ago. Now they expecting bills between £150,000 and £200,000. 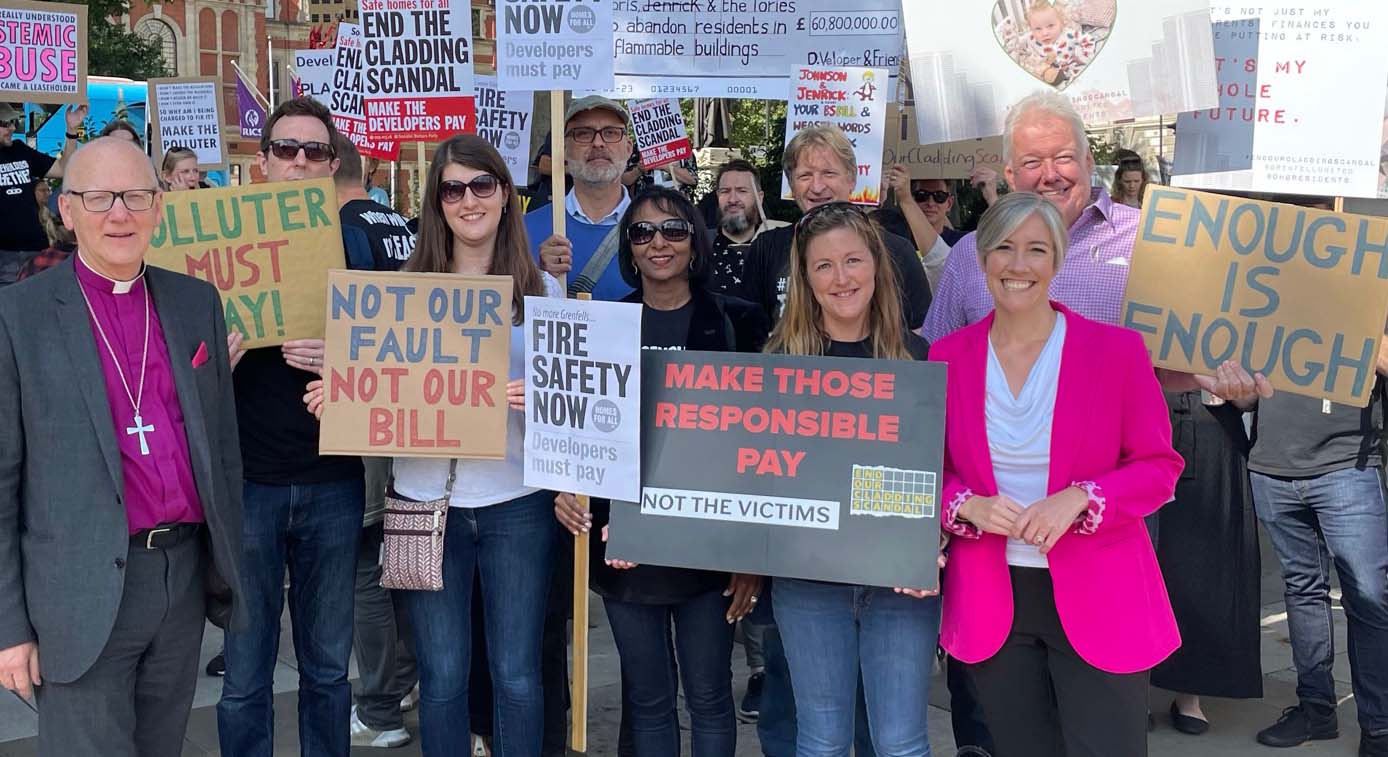 “And just like you, they are left to live in fire traps, with their mental health and their future plans in tatters.”

Daisy Cooper was joined at the rally by the Bishop of St Albans Alan Smith who has campaigned on this issue in the House of Lords and by St Albans leaseholder Alison Hills, a resident of Opus House in Charrington Place, which was identified with fire safety issues after Grenfell.

The day before, Alison gave evidence to a Commons committee scrutinising the building safety bill, which proposes giving all homeowners in high-rise buildings above 18 metres a greater say in the management of their building and, among other measures, up to 15 years to claim compensation for sub-standard construction work.

“Throughout the ping-pong process of the bill, leaseholders across the country were repeatedly informed that protection would be forthcoming in the bill, but it is clear that is not the case,” said Alison.

“Personally, I could be facing a bill of between £150,000 to £200,000 if funding is not forthcoming from either developers or the building safety fund. That could result in bankruptcy and the loss of my career as a solicitor, because my professional qualifications will be automatically revoked if I become bankrupt. I know there are a number of solicitors, accountants, and other professionals who are in the same situation.

“Leaseholders’ finances are being completely wiped out. It is completely unacceptable to put us under this level of financial risk and burden – in the middle of a pandemic as well, one might add, which only adds to the financial and mental health distress. There have already been reported suicides as a result of this crisis.”

Alison also spoke about the difficulties facing leaseholders in seeking redress from parties responsible for the fire safety crisis, such as developers and manufacturers.

“There are so many people involved here, but it is glaringly obvious that this bill contains no repercussions at all for those people. The only people who have been legally held to account are the innocent leaseholders. As I see it, the fundamental role of government is to protect victims and hold perpetrators to account, but this bill does the exact opposite of that, and it is unacceptable.”

As well as serving currently on the building safety bill committee, Daisy pressed for the financial interests of leaseholders to be protected in the first piece of post-Grenfell legislation, the Fire Safety Act, which received royal assent in April.

“When the first piece of legislation came forward, I tabled for the first time the principle that no leaseholder should have to pay for these historic fire safety defects not of their making. I worked cross-party for 10 months to fight the government to get that principle into law, but they stopped us at the final hurdle.

“What the Tory government said then was that they would bring forward proposals in this second piece of legislation, but now we find they are missing from the building safety bill too.

“The government’s approach to the cladding and fire safety crisis has been an utter scandal, and that’s why I’ve put forward a 10-minute rule bill currently going through parliament calling for a public inquiry into the government’s catastrophic handling of the crisis.

“My message to Michael Gove in his new job as housing minister is – stump up the cash, make homes safe and go after those responsible.”