The need for an effective immigration policy to ensure the future success of hi-tech businesses in the UK was endorsed by Daisy Cooper after a visit to Imagination Technology.

Imagination designs chips that power a range of hi-tech devices from smartphones and self-driving cars to data centres, and employs a workforce of 850, including staff from 42 countries.

Daisy, the Liberal Democrat parliamentary candidate for St Albans, was invited to tour the company’s HQ in Kings Langley, part of the St Albans constituency. 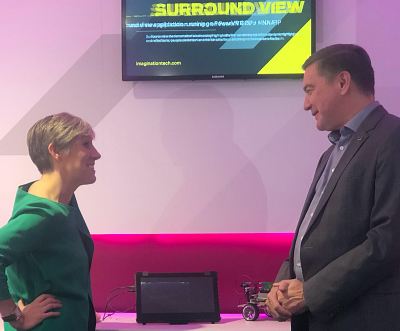 “We’ve invited all the main parties to hear about the challenges Imagination and companies like us face in recruiting highly skilled people,” said Woz Ahmed, executive vice-president of corporate development and strategy.

“Talent is our lifeblood. We have no option but to recruit from other countries because there aren’t enough technology and engineering graduates coming through in the UK. And having a diverse range of people also facilitates true innovation.

“The parties need to know how important it is that we have an immigration system that works.”

After her visit Daisy Cooper commented:

“To kickstart the jobs revolution and ensure businesses like Imagination continue to thrive in Britain, we need the talent and partnerships that our EU membership brings.

“Liberal Democrats believe we need to fix our broken immigration system. Both Labour and the Conservatives want to make it worse by delivering Brexit and ending free movement.

“Liberal Democrats want to build a brighter future for our country, and we will do that by stopping Brexit and by introducing a fair and effective immigration system that supports our economy and treats everyone with dignity and respect.”