The current mayor, a former mayor and the city’s MP all turned out to mark the opening of St Albans Credit Union’s new office on Holywell Hill – a community bank offering affordable loans.

Daisy Cooper MP cut the ribbon with the help of the mayor, Councillor Janet Smith (left), a long-time volunteer with the credit union, watched by Lesley King, a former secretary and founder member, and the current chairman Colin Metcalfe. 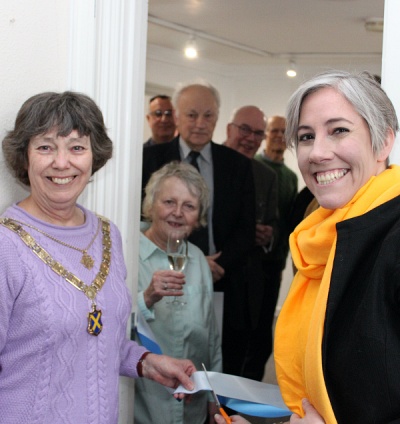 The St Albans District Credit Union is a mutual bank that encourages saving and offers fair cost loans to the community.

Among the guests were also several directors, volunteers and supporters from the early days of the credit union, including John Peters, who as mayor of St Albans in 2002 performed the opening of the original office in Hatfield Road.

“You should all be justifiably proud of what you helped to set up 18 years ago,” Colin Metcalfe told them.

Amazing resource for an affordable loan
After cutting the ribbon, Daisy Cooper said: “Huge congratulations to all of you for making this happen.

“St Albans Credit Union is clearly an amazing resource for anyone who needs an affordable loan – whether that’s to buy an annual commuter season ticket, to do home improvements or to tide them over during a difficult period.

“I’ve just learned a lot more about how the credit union works and look forward to promoting it to those who might benefit.”

The new office can be found at 38 Holywell Hill, St Albans, AL1 1BX.