Liberal Democrats will stop Brexit if they have a democratic mandate to do so – including a People’s Vote – Daisy Cooper confirmed at a General Election hustings in St Albans cathedral.

Daisy, the Liberal Democrat parliamentary candidate, was one of five contesting the St Albans seat who answered questions put by the public. 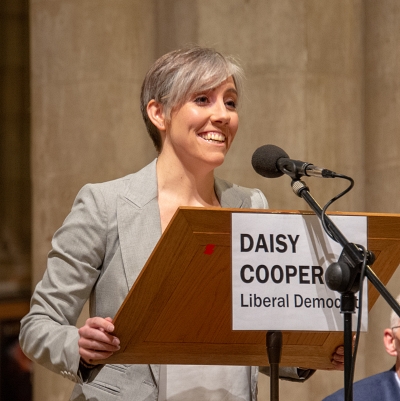 “Liberal Democrats have led the campaign for a People’s Vote for two years or more,” she replied to a question quizzing each candidate on their support for a second referendum.

“We have tabled 17 amendments in parliament calling for a People’s Vote and have voted for it at every single opportunity.

“The very last chance we had before the general election was the Queen’s Speech, but unfortunately the Labour Party didn’t support us and therefore it wasn’t selected. So, yes, absolutely we are campaigning for a People’s Vote.

“What we have also said, however, is that we are completely honest about the fact that we are Remainers. We think we’re better off in the EU and we’re not shy about that fact.

“We’d only stop Brexit if we had a democratic mandate to do so, whether it’s through getting a People’s Vote or revoking Article 50 if a majority Liberal Democrat government was elected.”

“Where possible we’ve shown where individual tax rises will actually fund some of our spending pledges,” she said.

On the climate crisis, Daisy warned:

Ambitious and fully costed green agenda
Over the next 10 years Liberal Democrats are pledging to plant 60 million trees, make every car electric, ensure 80% of energy is renewable, and insulate 30 million homes.

“That is a very ambitious green agenda – and it’s fully costed,” she said.

“Over last few years the Conservatives have cut subsidies, cutting them for solar altogether, they’ve banned onshore wind, and been taken to court three times for not meeting our clean air targets set by the EU.

“We have got to start acting now.”